We are a group of families from Coore, Shanavogh East and Shanavogh West and neighbouring townlands near Miltown Malbay in county Clare, Ireland.  This is where we live.​ 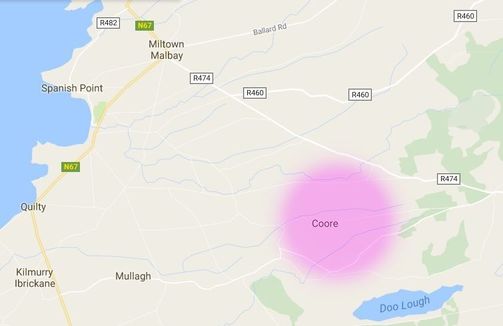 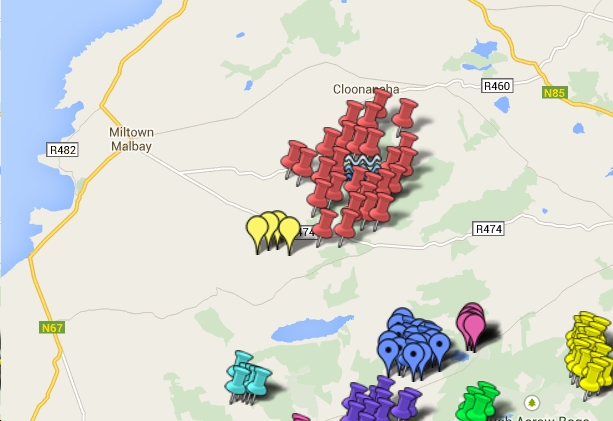 WHY ARE WE OBJECTING TO THE COORE/SHANAVOGH WIND FARM?

We feel that the cumulative impact of both wind farms would be just too much industrial development in an agricultural and residential community.
​

​IF THE COORE WEST / SHANAVOGH EAST WIND FARM WAS TO BE DEVELOPED, THE SAME VIEW WOULD INCLUDE 33 INDUSTRIAL-SCALE WIND TURBINES.​ ​

REASON 2 - Too close to homes

All our concerns are based on the distance between homes and turbines. The 126m-tall turbines will be far too close to our homes. Twenty-two houses will be located within 600m and eight houses within less than 500m of at least one turbine from the Coore/Shanavogh wind farm.
The photomontages submitted by the developers during the An Bord Pleanála appeal stage show the visual impact these turbines will have. Note the size of the houses in comparison to the turbines.

Prospective view of Shanavogh East townland after construction of Coore/Shanavogh wind farm, showing scale of turbines (126m high) in relation to homes. Distances to homes varies, between 380m and 506m in this view. Image adapted from developers' EIS (2013).
The example of Mount Lucas, county Offaly
The visual impact becomes clear from images taken at the Mount Lucas wind farm near Daingean in county Offaly. The nearest house is ca 1.2km distant.

This was the predicted visual impact  of the Slievecallan wind farm at a distance of about 7km. 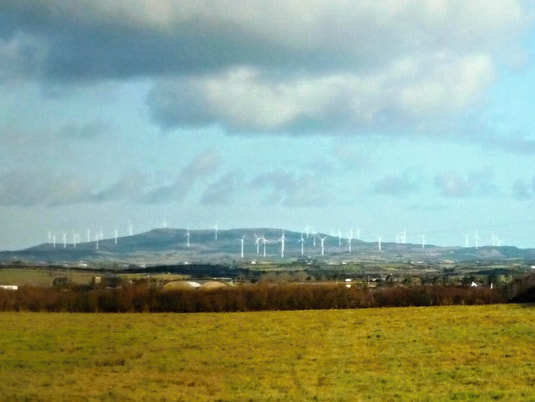 Now that the Slievecallan wind farm is under construction (autumn 2017), this is the real visual impact  at a distance of about 15km. 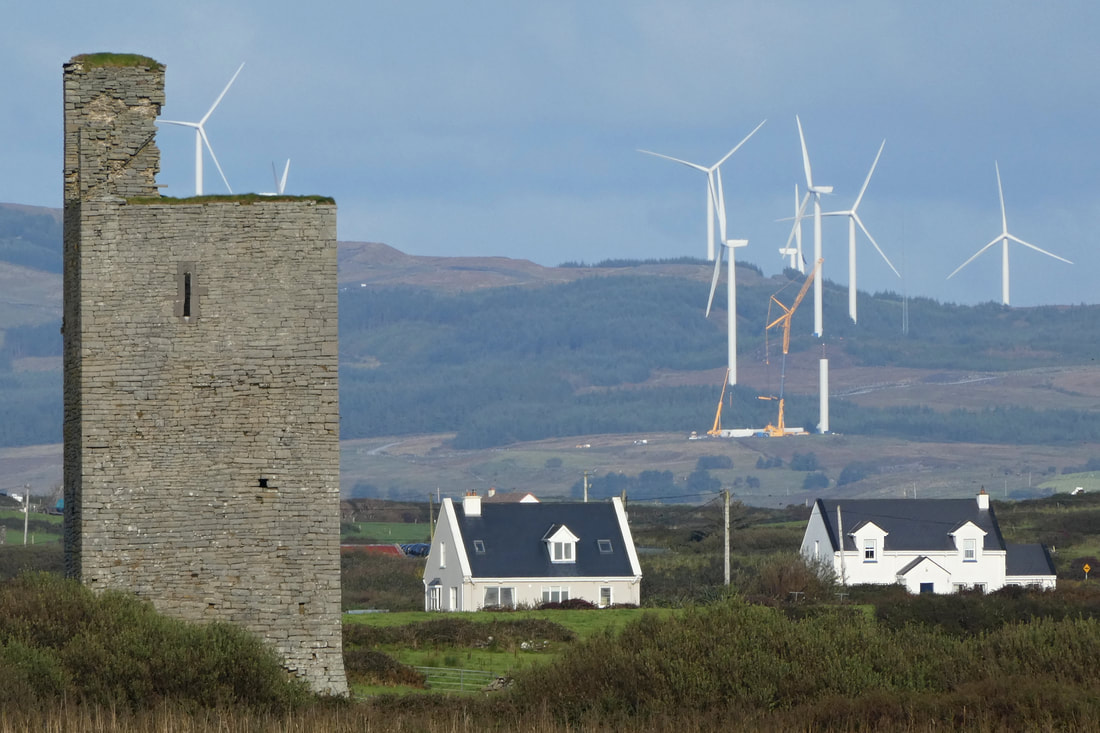 Shadow flicker occurs when the sun shines through the turning blades of a wind turbine. This disconcerting effect may cause health problems in people with certain forms of epilepsy or migraine.  Developers suggest residents should close window blinds during sunny weather or plant hedges for blocking out shadows from the 126m-tall turbines.

it is For these reasons that we have been resisting the development of the coore/shanaway wind farm through the following planning and legal processes.
​

The planning process - Clare County Council and An Bord Pleanála

We engaged with the planning process for over seven years.

However, we were firm in our resolve that our concerns for our families and community were valid. In another attempt to get justice, we decided to seek judicial review of the An Bord Pleanála decision in July 2014.

We had won!
Judge critical of An Bord Pleanála as wind farm permission overturned (Irish Times)

We had won again!

- An Bord Pleanála appealed the High Court judgment quashing the
​         Board’s permission for a wind farm development of four turbines at
​         Coore West and Shanavogh, Co. Clare. It was concerned with issues
regarding the obligations of An Bord Pleanála to give reasons for its
decisions.

- On 17 July 2018 the Chief Justice of the Supreme Court delivered the
Judgment: the Supreme Court quashed An Bord Pleanála's grant of
planning permission. He stated that the central question had been
whether the Bord had given adequate reasons in its decision to grant
permission and that the Judgment was based on An Bord Pleanála's
failure to make the sort of of findings which should form part of a valid
Appropriate Assessment (AA).

We have won again!

And we're delighted! Many thanks to all our supporters and our
amazing legal team. ​Two more issues now needed to be clarified:

1 - What exactly was going to happen in relation to the planning
application?
2 - Who is going to pay what?
Our legal journey - Supreme Court 2
Connelly -v- An Bord Pleanala & ors - [2018] IESC 36
These issues were decided by the same Supreme Court Justices in a sitting in the Four Courts in Dublin on 30 July 2018.
Their Order is that:
1 - The matter (planning application) is to be remitted back to the
Board to determine it (again).
2 - We were awarded 75% of costs.
What does this mean for us?
1 - For now no planning permission exists for the wind farm in our midst. We're relieved at this outcome.

However, we're not quite sure what happens when the planning application is remitted back to the Board (we're informed this may take a while). We may or may not be able to be involved in the process by way of submissions. We would welcome such an involvement.

Nevertheless, if this isn't possible, we will have the opportunity to take another judicial review of the Board's new decision if that should be necessary.

2 - For now, we'll be able to catch up financially while continuing to prepare for the next challenge.

We would like to thank our many supporters and well-wishers throughout these protracted planning- and legal processes. Our legal team O'Connell & Clarke have been have been brilliant, dedicated and hardworking, thank you!

​We need your help

We are a small, rural community and our resources are much reduced following the prolonged planning and legal processes.

The planning- and legal processes have been ongoing for over seven years now at the cost of many thousands of euro. We have been fundraising regularly to keep up with the payments for our environmental consultants and our legal team. We still owe rather a lot, and right now we don't know what additional cost we'll have to incur to continue to keep the wind farm at bay.

The final cost will depend on the length and complexity of the case.
​

We would greatly appreciate any donations, however small.

- Contributions may be made directly to our campaign account at the Miltown Malbay branch of Bank of Ireland. The account name is: Coore Shanaway Too Close Campaign.

Thank you sincerely for your support!